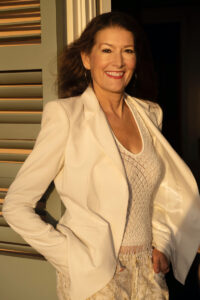 Maria Baltazzi is an Emmy Award-winning producer, who has carved out a career producing on location throughout the world. She won her Emmy for Survivor seasons one and two as one of the original show producers. She did a total of seven seasons: Borneo (1st), Australia (2nd), Africa (3rd), Thailand (5th), Pearl Islands (7th), All-stars (8th), and Vanuatu (9th).

After Survivor, Maria began her own company called Sojourn. Working through Sojourn, she developed and Executive Produced with Mr. Burnett, Expedition Africa: Stanley & Livingstone for History. The series was Emmy nominated for Outstanding Cinematography Non-fiction.

Other series include National Geographic’s Earth Live!, ABC’s pilot, The Gift, Lifetime’s Women of The Bible from creators Roma Downey and Mark Burnett, Animal Planet’s critically acclaimed 3-part series, Battleground: Rhino Wars. This project was shot in South Africa around the Greater Kruger Area, north of Johannesburg. The story revolved around four US Special Forces Operators working alongside a South African anti-poaching team to hunt down rhino poachers. The show aired in the United States, South Africa, United Kingdom, Canada, Australia, New Zealand, Taiwan, and China. World’s Toughest Truckers, a co-production for Discovery US and Channel 5 UK; One Man Army for Discovery and Renegade 83; Sarah Palin’s Alaska for TLC and Mark Burnett. This series debuted at almost 5 million viewers; this was the biggest premiere in TLC’s history.

Also, an adventurer when not shooting, Maria has climbed Kilimanjaro twice (2008 and 2015). Also climbed Mt. Olympus, Greece. Trekked to Mt. Everest Base Camp. Dived in locations like the Great Barrier Reef, Palau, and the Maldives. She is a marathon walker, raising money for charities, and has participated in the NYC Marathon, 2009; LA, 2010; Athens, 2010; The Great Wall, 2011; Solar Eclipse Australia, 2012; Safaricom Kenya, 2013; Rio De Janeiro, 2014; Antarctica, 2015. Her goal was to do a fundraising marathon on every continent.

This website uses cookies to improve your experience while you navigate through the website. Out of these, the cookies that are categorized as necessary are stored on your browser as they are essential for the working of basic functionalities of the website. We also use third-party cookies that help us analyze and understand how you use this website. These cookies will be stored in your browser only with your consent. You also have the option to opt-out of these cookies. But opting out of some of these cookies may affect your browsing experience.
Necessary Always Enabled
Necessary cookies are absolutely essential for the website to function properly. This category only includes cookies that ensures basic functionalities and security features of the website. These cookies do not store any personal information.
Non-necessary
Any cookies that may not be particularly necessary for the website to function and is used specifically to collect user personal data via analytics, ads, other embedded contents are termed as non-necessary cookies. It is mandatory to procure user consent prior to running these cookies on your website.
SAVE & ACCEPT